At the age of 13, I sat on my grandmother’s steps in front of her house in the small rural village of Toco, Trinidad, talking to my dad, who had returned from NY for a short visit. Under the dull street lights, with bright eyes and convicting words, I told him “My life’s dream is to go to Paris.” At 13, I wasn’t yet sure what will become of me, but I was sure of the woman I wanted to be and where I wanted to live that life. As a child, life is a dream. As an adult, reality sets in and life serves you debilitating twists and turns. My dream of Paris never wavered although it faded from time to time, especially through college, where I was heavily misinformed [by fellow students] about how blacks were ill-treated in France. This knowledge of the country known for its beautiful art and design had turned me cold, as by then I’ve already faced my share of racism here in the U.S. But yet, thoughts of Paris popped in my head ever so often, even though reality never permitted it to be more than just a dream.

Then the beauty that is Julia Sarr-Jamois came into my life. The Sengalese-French fashion goddess is my knight in shining Afro. She shot into the spotlight as the Fashion Editor at Wonderland and has since stayed there with her 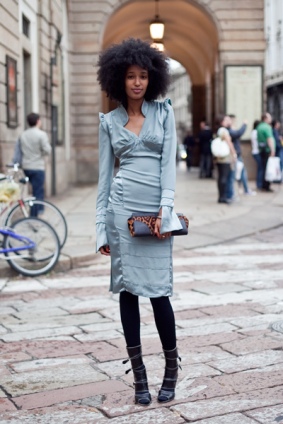 high end street style. Now that she is the Senior Fashion Editor at i-D, my love for her has been renewed as my love for Paris. She represents everything a young black woman in this industry wants to be: respected in your own skin.

As I tried to break into the salacious world that is high fashion, it was quickly apparent that my struggle would be greater than many others who have tried. There were times where I thought I would have to change a lot about myself to fit into this luxurious, lily white world that is high fashion – namely my hair. Yet Julia (a name I now roll off my tongue as if she were the first and last beauty I would ever encounter) walks with pride and her afro high.

Most recently, Balmain creative director Oliver Rousteing’s first installment for his CNN Style series on the theme of “#diversity — going beyond fashion to explore issues around politics, gender, family, race and culture,” came across my computer screen and I am jolted into a state of euphoria. “I was adopted from an orphanage when I was around a year old,” he started. “It was 1985 in France, I was a young black child…”

Wait, Oliver is black???? Although I see him every day (thanks to the good people of Instagram) I’ve never looked at him as a “black designer.” He was extremely young which I’ve heard time and time again, but generally there is rarely any mention of his race when classifying him and his position in the fashion industry. This reality hit me as hard as Lady Gaga’s couture Gothic gown in American Horror Story: Hotel.  Holy hell, Olivier Rousteing is black and the head of a French luxury heritage house. Although Rousteing isn’t the first black designer to head a luxury heritage house (there was Edward Buchanan at Bottega Veneta and Patrick Robinson at Giorgio Armani for Armani Exchange and Paco Rabanne), he is the most modern face, a face of my generation – and what a handsome face it is. Rousteing’s model features and perpetual ‘suck faced’ cheekbones allows him to be the perfect representation of diversity for the Balmain brand. Like Sarr-Jamois, he’s young, black, fashionable and French. He’s also a staple in the fashion world that pioneers our generation.

In his CNN piece he mentions when it was first announced that he would head Balmain, the press took notice of his color, however it is beautiful that his talent overshadowed his skin color and the people at Balmain saw this in their decision to make him creative director. It is important to see someone in his position taking up the fight for diversity in the fashion world especially here in the U.S where there is separatism between “black designers” and “designers” in the industry.

So I’m off to Paris, to join the good fight of diversity with my chocolate skin and my long natural hair. And when I meet Sarr-Jamois in a little French café in Paris, I will proudly tell her: “Julia, you’re the ‘it girl’ that got me here.”

5 thoughts on “Paris and the Black Creative”